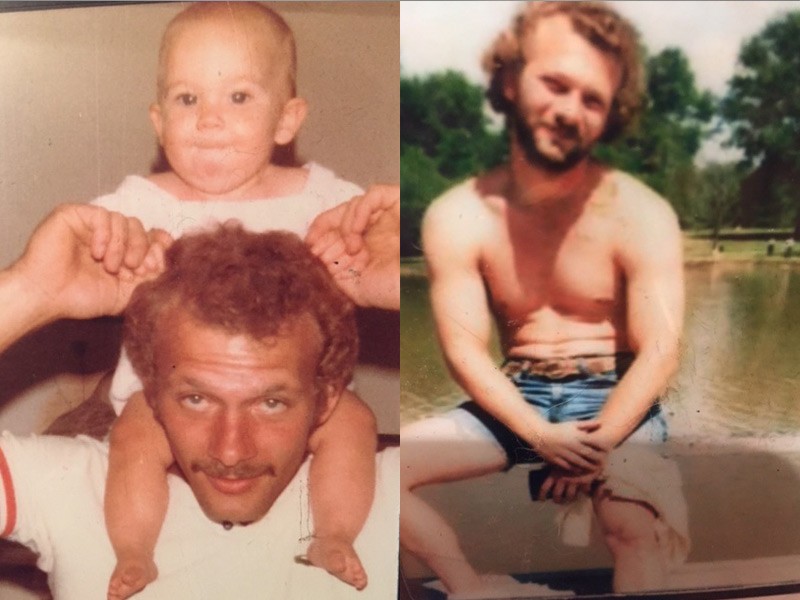 On June 3, 1981, a couple found a locked 55-gallon drum floating in Chickamauga Lake near Chattanooga.

Alarmed by the smell, they called the Hamilton County Sheriff's Office, who opened it to find a grim scene. Inside was the nearly naked remains of Johnny Mack Salyer (pictured above), a Virginia man who had been missing since May of that year.

Mack Salyer had disappeared 10 days earlier. What exactly happened to him in the intervening days is unknown, but investigators believe they know who shot Mack and stuffed him into that barrel.

It took nearly 35 years, but Billy Hawk Jr. was convicted in his murder in 2016. Then on May 1, 2019, Hamilton County Judge Don Poole overturned that conviction and ordered a new trial.

Johnny Mack Salyer was 27 years old when he disappeared. At the time of his disappearance, he was estranged from his wife and 1-year-old daughter, who lived in Indiana, according to a press release from the Hamilton County District Attorney's Office.

After his remains were discovered, Mack was buried in his home state at the Temple Hill Memorial Park in Castlewood, Virginia.

Mack and the prime suspect were known drug dealers and had recently been arrested by TBI agents during an undercover narcotics operation.

Hawk had been estranged from his family for about a decade at the time of his arrest in 2015, according to a press release from the Hamilton County District Attorney's Office.

At the time of his arrest, Hawk owned Pro Bowl West on Baddour Parkway in Lebanon and lived in Greeneville in East Tennessee, according to The Wilson Post.

A couple living on Lake Chickamauga discovered the barrel floating near their dock. When the barrel was opened, the investigators found Mack's badly decomposed body, which had been shot in the chest and stuffed into the barrel which was then locked.

The exact time of Mack's murder are unknown but it is believed he was killed on May 24, 1981.

What is known is that the initial Hamilton County Sheriff’s Office investigation show Billy Hawk was the prime suspect since the beginning. Mack and Hawk had a previous relationship because they were co-defendants in a cocaine-distribution case. A third co-defendant, Debra Bales, married Billy Hawk several months after their arrests.

In 2015, District Attorney General Neal Pinkston's Cold Case Unit began a review of the case and assembled a multi-agency team of investigators that included, along with local agencies, the Tennessee and Georgia Bureaus of Investigation, ATF, FBI and the U.S. Attorney's Office.

Russell County, Virginia DA Brian Patton obtained an order to exhume Mack's body to re-exam it and determine a cause of death.

“The medical examiner now had more advanced technology that could help yield more information about how he died,” Patton said.

The remains were examined by a University of Tennessee forensic specialist, who found eight metallic objects, one of which was a .22-caliber bullet. Hamilton County's chief medical examiner also discovered a suspected bullet hole.

Based on that evidence, the Hamilton County Grand Jury indicted Billy Hawk on Monday, Sept. 21, 2015 on a charge of first-degree murder. Hawk was arrested Sept. 22, 2015, in Greene County, Tennessee.

Prosecutors argued Hawk silenced Mack because he feared the man would testify against him in a pending cocaine distribution case.

The first witnesses to testify were the University of Tennessee forensic specialist, Tennessee Bureau of Investigation agent, and Hamilton County's chief medical examiner. But some of the most damning evidence came from Hawk's family and friends. His ex-wife testified Hawk had dropped a rusty, 55-gallon drum into a lake in late May 1981. His brother, Bob Hawk, saw Hawk and an unknown man in a boat in May 1981 at the Chattanooga Yacht Club.

"I remember asking him, 'What were you guys doing?' He said, 'We were fishing.' That struck me as odd because Billy wasn't a fisherman," Bob Hawk testified, adding his brother didn't have any fishing equipment in the boat.

Hawk's ex-girlfriend Wynna Williams testified Hawk held her at gunpoint and confessed. She said Hawk told her: "We tricked him, we took him through the woods. I shot him."

On the trial's third day, Robert Stultz testified that Mack had stopped at his home and asked to borrow money. Stultz said he refused and Mack left to look for another lender. He never saw Mack again.

Hawk's defense argued another man named CW Stephens had a better reason to kill Mack than Hawk did. Mack reportedly owed "thousands of dollars" to Stephens, a known drug dealer with the "West Cartel," for drug trafficking. They also questioned the motives of the state's main witnesses, two of Hawk's ex-lovers. They further argued that the state shouldn't have disposed of the barrel.

After deliberating for seven hours, the sequestered jury found Hawk guilty of first-degree murder. He was sentenced to life in prison at Northwest Correctional Facility in Tiptonville, Tennessee.

In the days following the verdict, Mack's daughter filed a wrongful death suit for $5 million against Hawk, using the testimony of self-described "crooked cop" Terry Slaughter as the main evidence. Slaughter said during the trial that Hawk knew more about Mack's death than he should have.

Slaughter testified that Hawk called him the day the barrel was found and asked if the body had been identfied.

"It was quite evident to me that Billy had been in on the murder," Slaughter said.

On April 30, 2019, Judge Don Poole rejected Hawk's motion for an acquittal, but he did grant a new trial.

Hawk argued in a post-conviction relief motion that prosecutors improperly mentioned evidence from a polygraph in front of the jurors. Tennessee Criminal Court of Appeals ruled that polygraphs were in 2017.

Hawk was scheduled to appear in court on May, where a bond will be discussed.

This story will be updated as more information becomes available.

If you have information about any cold case, please contact the Cold Case Hotline at 423-209-7470 or by email at coldcases@hcdatn.org.