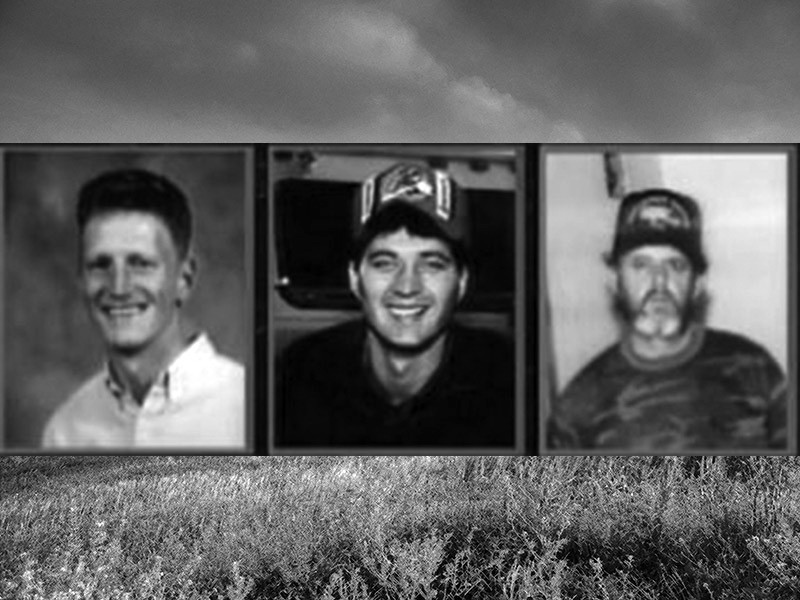 Searchers knew they were on the right track when they found a patch of matted grass at the end of the tire tracks. It wasn't just how the grass had been forced and bent, but the blood and brain tissue among the blades and fallen leaves that told them something terrible had happened.

The search party had been combing the woods of Signal Mountain, Tennessee, since Richard Mason, Kenneth Griffin and Earl Smock had left Saturday afternoon, July 9, 1988. The men rode off on three ATVs to adventure in the woods around Mason's home in Walden with the intention of going swimming in the local swimming hole.

Nearly a decade after the murders, the Hamilton County Sheriff's Office arrested a suspect. But was he the responsible party?

Richard D. Mason, 47, was the father-in-law of Kenneth Griffin, 20, who was visiting his wife's family on Signal Mountain, Tennessee, with his friend and Earl Smock, 20.

Griffith and Smock, both 20, were combat engineers in the same Air Force squadron and were stationed at Eglin Air Force Base in Fort Walton Beach, Florida.

Because they had only brought shorts with them from Florida, Griffith and Smock were last seen wearing green USAF flight suits. 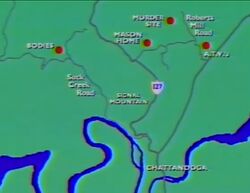 The three men set out on three ATVs near Mason's home on Signal Mountain. They had a cooler filled with drinks and a pistol in the seat of Mason's ATV.

Mason on his own. Griffith on a borrowed red Honda. Smock had brought his red, white and blue ATV from Florida.

When they didn't return by dusk, Paula Kirby, nee Griffith, became concerned. This next morning the family called neighbor Stanley Nixon, who went out searching for the three men.

His efforts were unsuccessful, but he did spot ATV tracks on the dirt trails near Mason's home. He followed the tracks to a nearby campground to Helican Road, which led to a swimming hole called the "blue hole" and then to Vandergriff Road. He lost the trail there because the road is paved.

Meanwhile, three ATVs had been found in an illegal dump on Roberts Mill Road. Two of the ATVs were covered in blood, but Smock's ATV was clean. The pistol was still wrapped in a towel under the seat of Griffith's ATV.

On Monday morning, July 11, 1988, Nixon was joined by search teams on Helican Road.

The Hamilton County Sheriff's Office set up a command post that morning, and the searcher walked the roads. When the one search team drew closer to a gate on Helican Road, they found it "manicured," Nixon testified.

He said it looked like someone had used a branch from a pine tree to sweep the dirt road and two patches of grass seemed to have been trampled. Sheriff's Detective Larry Sneed saw what he thought were drag marks from the road to a tree that had blood and possibly brain tissue at its base. They also found a knife in the grass that Griffith's brother identified as belonging to the missing man.

The Sheriff's Office called in a cadaver dog, which found a large pool of blood and bone chips consistent with a human skull, which had been covered with leaves. One of the skull fragments had a striation consistent with a shotgun pellet. Investigators also found a nearby tree that had some of its bark blasted off by a shotgun.

Investigators searched for four days before they found the bodies of Mason, Griffith and Smock 13 miles away in another dump site on Big Fork Road in Marion County.

The men were stacked like cord wood on the edge of a bluff on Big fork Road. They were covered with brush and barbed wire but were visible from the road.

Frank King, the Hamilton County medical examiner, determined Kenneth Griffith died from a gunshot to the left side of his ear. The bullet entered just above his left ear and exited the right side. The bullet trajectory was consistent with the shooter standing above the victim.

Griffith also had scraps on his chest consistent with being dragged over a rough area, like a dirt road.

Richard Mason had been shot in the chest at close range by a shotgun loaded with buckshot. The wound's angle also made it appear as if the shooter was standing above Mason, who was possibly sitting.

Earl Smock was shot twice with birdshot from a shotgun, once at close in the right shoulder and chest. King said the first shot likely knocked Smock to the ground where the shooter stood over him and shot again. This time so close the wadding from the shell lodged in Smock's lower left shoulder.

It was possible that the three men were shot with three different guns.

The Theories and Doubt

The theory of the case that police quickly picked up on was that Frankie E. Casteel, of Rock Springs, Georgia.

Casteel and his wife Susie owned about 130 acres around Helican Road near the "blue hole" and seemed to be a potential witness to whatever happened.

Casteel had become irritated with the people crossing his land on Helican Road to get to the "blue hole." Locals believed the road to be public but Casteel believed it to be private.

Casteel was angered at the trespassers for littering around the swimming hole, tossing out beer cans and smoking marijuana.

After consulting a police officer, he began a logbook of the trespassers. He had logged an encounter with two men, but not the victims.

A host of witnesses came forward telling of angry encounters with Casteel. All were going to swim or swimming at the "blue hole" when Casteel would approach with a shotgun. Each witness said Casteel would point the gun at them, finger on the trigger and tell them to leave.

Investigators didn't test him for gunpowder residue and couldn't get any soil samples from the Jeep. But they did find the burned remnants of what appeared to be a tarp in his fire pit.

But was there another suspect?

Stanley Nixon told police of an argument between Mason and Cecil Hickman.

Casteel had recently bought his 130 acres from Cartter Patten. Hickman took care of the property when Patten owned it.

About eight months before the murders, Mason and Hickman crossed paths when Mason trespassed while hunting. Nixon said he was hunting with Mason and thought they were another neighbor's land. Nixon and Mason had separated when Nixon ran afoul of Hickman and his two sons, all of whom were armed.

Hickman asked Nixon to leave. He said he would when he found Mason. Hickman responded by firing a pistol three times in the air.

A few days later, Nixon and Mason were driving when they spotted Hickman on the side of the road. Mason swerved as if to hit Hickman. In response, Hickman pulled his pistol and shook it at the men.

When questioned Hickman had a solid alibi. He claimed he was in Kentucky when the murders took place.

But another witness said he saw Hickman's sons pushing two ATVs off the back of a truck into the illegal dump site on the evening of July 9, 1988.

The witness said that he never reported the siting to police because he was afraid the Hickman brothers would harm his wife and children. 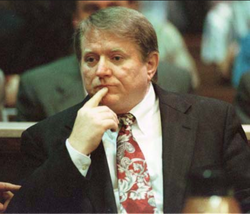 Frank Casteel (pictured here) came to the attention of investigators when he appeared at the command center on Roberts Mill Road in a neighbor's car.

At first, he cooperated, leading Detective Sneed to where his Jeep was parked and allowed officers to examine his freshly washed vehicle, his gun, and a logbook he kept of the people who trespassed on his land.

It wasn't until 1996 when the biggest break came in the case.

Casteel's mistress, Sharon Hill received an anonymous letter with news clippings about the murders, a second saying the writer witnessed Casteel killing Mason, Griffith and Smock, and third was sent to Hill's neighbors telling them she was dating a murderer.

Turned out the letters were sent by Casteel's jealous wife.

Hill went to the police and agreed to cooperate. She taped a five-hour conversation with Casteel and Susie Casteel, which was used as key evidence in his first trial. During the conversation, Susie Casteel mentions the murders several times and implies Casteel's guilt, however Casteel never confessed.

It was more than a year later when he was first tried in the triple murder.

During the two week trial in May 1998, prosecutors argued the shootings were the final chapter in a series of confrontations with trespassers.

Casteel he was simply camping on his land with his wife that weekend and had nothing to do with the murders.

Multiple witnesses told police of hearing six or seven shots from the direction of Helican Road between 11 a.m. and 1 p.m. Saturday, July 9, 1988.

One witness testified to 2 p.m. for the gunshots and said she saw a Jeep Scrambler with a tarp over the bed coming from the area a little while later. Another witness said the Jeep was seen at the illegal dump site where the ATVs were found.

The most damning witness said he saw a woman hosing blood out of the back of the Jeep on July 10, 1998. He wrote down the license plate number and saw the same Jeep being driven by Casteel a few days later.

Casteel's wife testified she was with her husband the whole day July 9, 1988, as it was their wedding anniversary. The couple camped on their land and swam in the "blue hole" but the day was cut short when their dog got sick.

Investigators believe the ATVs were transported one at a time in the back of Casteel's Jeep Scrambler to the dump site and rolled down an embankment to where they were found. While only one ATV could fit, the machines were too heavy, weighing between 300 and 400 pounds, for a single person to lift into the bed of the truck.

Detective Sneed said there was only one drag mark leading from Helican Road into the woods.

Further testing showed, none of the shotgun casings or waddings found in the area around the gate were fired with Casteel's gun.

Casteel was found guilty but the conviction was overturned in 2001 and a second trial was ordered. The Tennessee State Court of Appeals ruled the conversation taped by Hill never should have been admitted into evidence.

It took 12 jurors from Loudon County only one hour and 45 minutes to reach a verdict.

The second trial in 2003 had the same outcome for Casteel even though there was no direct evidence of his involvement. He was sentenced to life in prison. The verdict was affirmed by the Tennessee Appeals Court in 2009.

Casteel is currently incarcerated. He is eligible for parol in 2024.