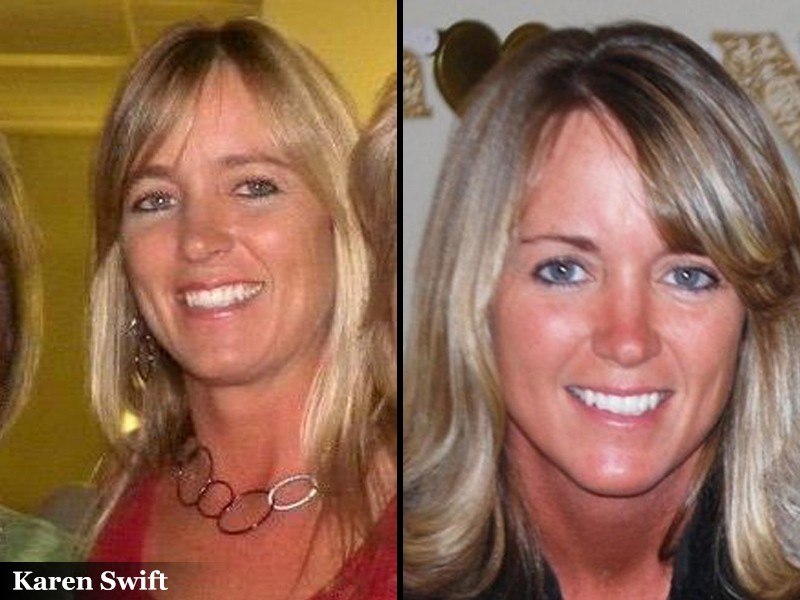 Kudzu vines have reclaimed the spot where Karen Swift's body was found in Dyer County, which is marked by a makeshift memorial placed by her friends.

The mother of four went missing after a Halloween party in 2011 only to be found more than a month later near a cemetery three miles from her home in Dyersburg.

The community agrees it has waited too long for her killing to be solved, calling for justice for the well-liked and well-known personal trainer.

"I think it's very important to keep the questions out there, because people want to get some kind of closure for the family," neighbor Clyde Thompson said. "And they've got questions about why it's taking so long."

But the community disagrees about who is responsible.

Some point to her husband, David Swift, whom Karen had started divorce proceedings against. Others believe a shadowy world of affairs, sex work and group sex may be responsible for her death.

She had been married to her husband David Swift since 1989. Together they had two sons and two daughters. According to news reports, the Swifts had a tumultuous relationship and Karen had filed for divorce on Oct. 10, 2011.

She was survived by her parents, one brother and one sister, one nephew, two nieces, four great nephews and numerous relatives, aunts, uncles, cousins and friends.

According to her obituary, Karen was an honored athlete in track. She continued her love of running by participating in 5Ks and working as a personal trainer at the YMCA.

"As a worker and as a person, Karen swift did wonderful things for the YMCA," said Randy Butler, who was Karen’s boss at the YMCA.

The last time Karen Swift was seen alive by her friends was Oct. 29, 2011, at a Halloween party at The Farms Clubhouse.

According to WREG.com, Karen left the party between 1:30 and 1:45 p.m. to pick up her car from a friend's house and then pick up one of her daughters, who was not feeling well, from another Halloween party.

Afterward, she returned to the home she shared with her soon-to-be ex-husband David Swift. He was the last person to see her alive.

He told police that Karen tucked there daughter into bed and then laid down with her. She must have left the house for an unknown reason, David Swift said.

One of her friends spotted her car on the side of the road less than a quarter mile from the house and called the Dyer County Sheriff's Office to report it.

The car had a flat tire. Karen and her purse were gone. One report said the costume she wore to the aprty was still in the car.

Volunteers, along with personnel from the Sheriff's Department, Tennessee Highway Patrol, the Dyer County Rescue Squad, members of the Shelby County Sheriff's Department, and a THP helicopter, searched the countryside in hopes finding of Karen alive. Those hopes were dashed six weeks after the Halloween party, when Karen's remains were found by a group of hunters about three miles from her home in a cemetery just off of Harness Road and Burnt Mill Road in Dyersburg, Tennessee.

Her remains, which were concealed by undergrowth, were identified by dental records.

Shortly afterward a judge sealed the case, including her autopsy and cause of death.

But in 2018 Burton Staggs, a journalist at the Tennessee River Valley News in Wayne County filed an Open Records request for the autopsy. The Tennessee State Medical Examiner’s Office sent him a copy.

According to the autopsy, she died from blunt force trauma to the head. Karen was partially clothed

She was too decomposed to determine if she had been sexually assaulted, but she had multiple broken bones.

Her death was ruled a homicide.

"Somebody ran up to her very quickly. She didn't even have time to get her hands up and protect herself at all. A crushing blow to the head, this was obviously an act of extreme rage," private detective Heather Cohen told Fox17 in 2019.

It took eight years for the Dyer County Sheriff's Office to turn its evidence file over to the district attorney's office.

Dyer County Sheriff Jeff Box told WMC Action News 5 Oct. 9, 2019, that his office had finally turned its evidence over to the DA.

"This is the first time the actual case file has been given to this office," said Danny Goodman Jr., district attorney general for the 29th Judicial District.

"The file is very expansive. It actually starts from the birth of Karen Swift and goes from the date of her death, and even information after that," Goodman said. "It is a very large file, lots of volumes. It’s going to take me a while to get through everything we have."

Goodman said his office would present the case to the grand jury if there is enough evidence to warrant a trial.

Box said it took so long to turn over to the DA because they don't a "smoking gun" in the case.

Although it took nearly a decade, Sheriff Box said his agency never stopped working the case.

The investigation into her disappearance started after car car was found with a shredded tire just a quarter mile from her home.

Box told WMC Action News in 2012 that investigators had several persons of interest at the beginning and some have been ruled out.

Sheriff's detectives collected much evidence over the years and sent some of it to the Tennessee Bureau of Investigation's crime lab in Nashville. Box said he also brought the U.S. Secret Service in to help with the case.

Most of the evidence can't be released because it's an open investigation, but Box said one thing he's willing to release is that detectives examined the GPS tracker on Karen's phone to determine exactly where she went after the Halloween party.

Detectives also searched the home Karen shared with her family not once but at least three times over the years.

Box wouldn't release any information about what evidence any of the search warrants revealed.

Because of the public's interest in the case, a Dyer County judge sealed most of the evidence related to Karen's death. That means it's not supposed to be subject to the Tennessee Open Records Act. But reporter Burton Staggs filed an open records request in 2018 with the Tennessee State Medical Examiner’s Office and was surprised to get a response with a copy of her autopsy.

"I look at it as we’re digging into this case to find the truth and to hopefully find justice for Karen Swift," Staggs said.

The 17-page autopsy revealed that Karen died from a hit to the front of her head, likely with a hammer. There were no defensive wounds. This suggests it "was a personal crime, not a random crime," said Staggs. "They think they know who did it but they just don’t feel like they can prove it."

The autopsy also said Karen was only clad in a pair of black underwear that were pulled down her thighs. It couldn't be determined if she had been sexually assaulted because her remains, which were found in an unusual position, were partially skeletonized.

Her toxicology report was clean with no signs of alcohol or drugs in her system. Also evidence was recovered from her hands, according to Tennessee River Valley News.

The first suspect wasn't David Swift. Instead it was a man named John Hogshooter of Dyersburg, who had been arrested for aggravated animal cruelty while investigators were searching a wooded area on Harness Road for evidence in Karen's disappearance.

Hogshooter allegedly poisoned two dogs, one of which belonged to the Swifts. He was arrested and his vehicle was impounded, however no evidence could be found that he was connected to Karen's disappearance or death.

As with most investigations, the husband was one of the primary persons of interest.

David and Karen Swift had been married for 22 years when she was killed but the years weren't all picturesque. They had been unfaithful but they denied any abuse. They had married once, divorced, remarried and Karen had asked for a second divorce before she was killed.

None of these things mean David killed his wife.

While the Dyer County Sheriff's Office was careful not to call David Swift as a suspect, they did search his home at least three times. For his part, Swift hired a high-profile attorney Steve Farese and refused to talk to either police or reporters.

And then he moved to northeast Arkansas.

Swift's attorney said there was more to Karen than what the public knows and he didn't "want to speak badly about Karen but there were some things going on that were quite unusual."

He called the case against his client "circumstantial."

Cohen said she took a fresh look at the case with no preconceived notions.

As far as the case against David Swift, Cohen's investigation found he had just had surgery and was on crutches when Karen was killed.

When David discovered his wife was missing on the morning of Oct. 30, 2011, he called friends and family to try to locate her. He reported her missing on the afternoon of Oct. 20, 2011.

Karen also reportedly got into an argument with a married woman at the Halloween party. A week and a half later the country club's security cameras were stolen. Cohen said Karen had been in at least two altercations with other two women.

According to Cohen's report, Karen attended the party with a couple who was known a "swingers" and the last text from Karen's phone said she was not having fun at the party.

When Cohen interviewed Karen's friend Erin Gray, the woman said Karen told her "she had got herself in a mess and she didn't know how to get out of it. But, that it had nothing to do with her husband."

Gray said Karen was having an affair with a married man. Also someone had given Karen $10,000 to help with the divorce.

Cohen paints a picture of a woman who had fallen in with a bad crowd and was possibly performing sex work for a prominent polyamorous couple in Dyersburg.

Any person with information about this case is asked to contact the Dyer County Sheriff's Office at 731-285-2802 or call the TBI at 1-800-TBI-FIND.