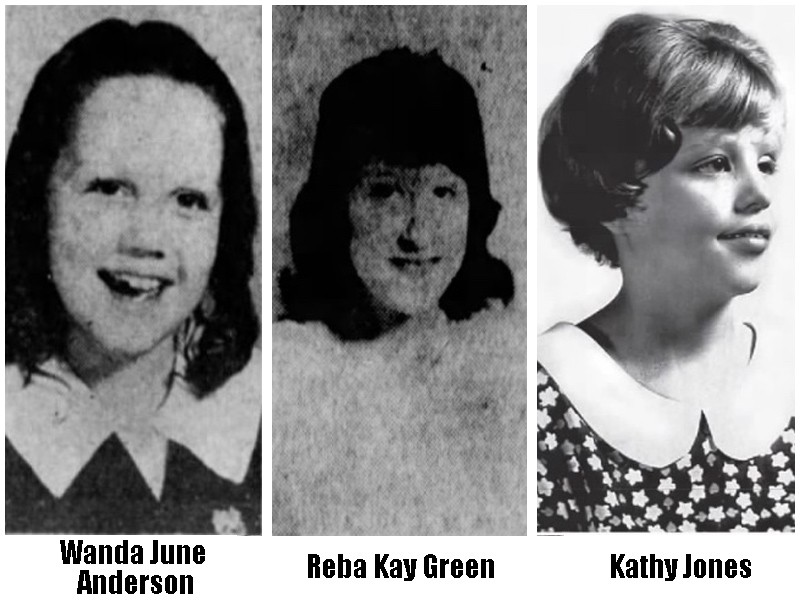 Starting in 1965, Nashville was terrified by the prospect that a killing rapist was on the loose, targeting girls and women across the city.

Over the course of four years, from 1965-1969, a subject (or subjects) was breaking into women's houses and raping them. The crimes, all remarkably similar, left three girls – Wanda June Anderson, Reba Kay Green and Kathy Jones – dead.

This was years before Marcia Trimble but, unlike that case, the killer or killers were never found.

These were the days before criminal profiling or even the term "serial killer." But some members of the Metro Nashville Police Department believe there may have been one prowling the city at that time.

Wanda June was visiting from Joelton to babysit six children at her sister's house when she was attacked in her bed while she slept and then dragged outside, according to news reports at the time.

She had been beaten with a pipe or hammer, choked with her pajamas and then raped.

The medical examiner said the girl was struck at least four times and "were so severe any one of them could have been responsible for her death," according to an article in The Nashville Tennessean from July 1965. A separate report by W.E. "Bud" Hopton profiled the killing as "carefully planned and meticulously carried out every step."

Her unconscious body was discovered by her sister and brother-in-law in an alley outside their home on 16th Avenue South near Belmont. She died two days later at Vanderbilt University Medical Center.

After the gruesome discovery, MNPD formed a taskforce of 25 officers, who scoured the city, including every nightspot and bar as they looked for the killer.

According to an article in The Nashville Tennessean from July 19, 1965, "a bloody shirt and undergarments" were found the next day on Natchez Trace. The evidence was taken to the FBI for processing.

They questioned a 22-year-old former nightclub bouncer and accused rapist, a "former mental patient" who also lived in the Belmont area, a man who confessed and recanted twice, and others in the days and weeks that followed.

But nothing came of the investigations.

Just six months after the death of Wanda June, 14-year-old Reba Kay Green was stabbed as she slept in her bed with her twin sister.

Called Kay by family, the black-haired seventh-grade student at North High School lived with her mother, father and six brothers and sisters in a four-room house on Nassau Street near North Nashville.

Her mother said in an interview with The Nashville Tennessean the day after the murder that her daughter was "a good girl" and "never in any kind of trouble at school."

Her sister did not wake up but her older brother who was sleeping in other room was. He said something woke him, so he went to check on his sisters.

"I went into the bedroom and saw somebody walking past the window. They appeared to be laughing," he said the following day. He couldn't give any details about the suspect.

Police believe the killer entered through the backdoor, gaining access through a previously broken window pane.

At the time, her mother thought Kay's twin may have been the target because they had swapped sides of the bed on the night of the murder.

"It was really bizarre for someone to come in, and stab her one time, then leave. That was very unusual," Metro Police Cold Case Unit Sgt. Pat Postiglione said in a 2008 interview with WSMV.

Along with Kay's brother's statement, her 9-year-old sister, one of 10 people in the home, said she woke up to go to the bathroom and saw someone standing over her sisters' bed. She said she was scared and ran back to her bed.

Police told The Nashville Tennessean that the neighborhood "had been plagued with a rash of prowler reports for the past several years."

They canvased the neighborhood, but was left without a clue as to who the killer could be.

It was more than four years later when Kathy Jones, 12, was kidnapped, raped and killed in South Nashville.

Kathy, a blue-eyed, blonde-haired sixth grader, was described as "sweet and quiet," "well-behaved" but a bit of a loner by neighborhood kids after her death. A student at Woodbine Elementary School, she had a good mind and "wasn't the type to talk to strange men" her teacher said.

On Nov. 29, 1969, Jones left her home to walk to the Thompson Lane Roller Dome. Earlier that day, she helped her mother with chores around the house, earning a $1 for admission and a doughnut at Krispy Kreme on the way home.

News reports from the time said the girl slipped away from her younger brothers "because she didn't want to be followed to the skating rink."

She disappeared before she made it to the rink.

Three days later her battered body was found sexually assaulted and choked to death in an overgrown field near Krispy Kreme on Thompson Lane, according to the Nashville Scene. Her white-boot roller skates – a recent gift from her aunt (or cousin) – lay nearby, her hands were bound behind her back and one of her socks was stuffed down her throat.

Police believe she was held captive for a few days before she was killed.

Investigators believe Kathy died of suffocation, likely from the sock, but she also had "shallow cuts ... on her neck and abdomen (made) with a dull knife or razor blade," as well as deep bruising on her young body, according to an article in The Tennessean.

Officers questioned more than 75 suspects during the investigation. Three men even confessed to the crime, but each was believed to be publicity stunts. Another 20 men also were given lie detector tests.

Police once suspected an 18-year-old boy, who had written the name "Kathy" along with other girls names and obscenities on the wall at a community center. They also checked out two middle-aged men who were known for their interest in approaching girls.

In 1977, police thought they caught the perpetrator when they charged Edward Warner Adcox, who worked at the roller rink at the time. He had previously been jailed for sexually assaulting a girl in North Carolina, and was later convicted in Nashville of sexually assaulting an 8-year-old boy.

Prosecutors dropped the charges before the case was presented to a Grand Jury, citing problems with witnesses.

In the late 1990s, MNPD again thought they had the guy, but they lacked enough evidence to arrest him, Capt. Mickey Miller told the Nashville Scene.

"I have personally worked on this case and clearly understand what horror this young girl must have gone through," Postiglione told The Tennessean in 2008. "Because of new DNA technology, which as you know is constantly evolving, there is real hope that we can solve this particular case."

Investigators have said these three murders could have been the work of different individuals, or they could've been committed by a single perpetrator.

When compared, there are obvious similarities between the crimes along with others of the era that didn't end in the deaths of the victims.

In early 1965 in the Belmont area just a few months before Wanda June Anderson's death, an unknown suspect entered a home through a window, dragged the victim down a hallway and raped her in the dark.

Several other rapes and another murder occurred in the same neighborhood in the months leading up to and after Wanda June's death, said Bud Hopton, then chief Tennessee Bureau of Criminal Identification.

A month before Kay Green was killed in her bed, the girl who lived across the street was nearly snatched from her bedroom. An unknown assailant tried to pull her out of her window, but she screamed, and he released her.

Just a few months after the murder of Kathy Jones, a 12-year-old girl disappeared. She was found bound and gagged in March 1970. She said a man came into her house, hit her over the head, and took her to a field near her home off Harper Road in Joelton.

More than 50 years later, the killer or killers may walk free, but investigators still believe they are one piece of evidence away from solving these crimes.

"Hopefully these three will be made at some point," Postiglione said in the WSMV interview.

(Note: Most of the information in this article came from primary sources, The Nashville Tennessean, Nashville Banner and Associated Press reports from the time of the crimes.)