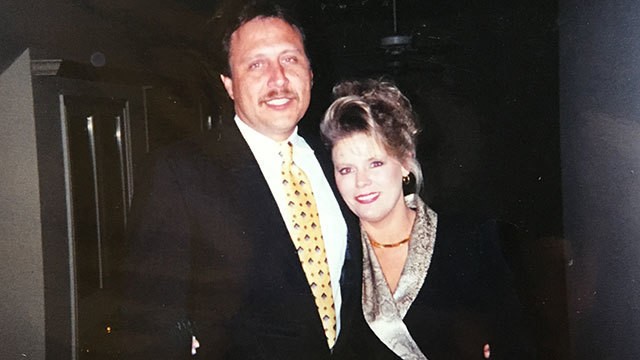 When Brandee Jan Thomerson wasn't at home on Valentine's Day 2003, her husband wasn't too worried.

She had a history of mental illness and drug abuse. She had disappeared before but she always came home again. Then the night stretched into days and weeks, so William Thomerson reported her as a missing person to local police.

She hasn't been seen or heard from since.

"In the back of your mind, you're always wondering, ‘Where did she go?'" William Thomerson told WKRN in 2018.

Anyone who has information about missing person Brandee Jan Thomerson, please contact the Sumner County Sheriff's Office at 615-452-2616.

Brandee Jan Thomerson, who also went by Rita, was 42 years old when she disappeared in 2003.

She was described as having blue eyes and brown hair and standing 5'4", weighing 145 pounds. She also has pierced ears, a mole behind her left ear and wears a partial plate for her two upper front teeth. William and Brandee Thomerson (pictured above) co-owned The Iron Skillet Restaurant, 3202 Highway 76 in Portland, Tennessee.

William said she was "loved" and "fun to be around."

She is considered "endangered missing" because she experienced manic-depressive disorder and had a history of drug and alcohol abuse.

William Thomerson said she had disappeared before, but she had always come back.

"Just an addictive personality, her behavior she couldn't control," William explained to WKRN.

Brandee Jan Thomerson was last seen at the restaurant she owned with her husband, William. A friend of Brandee's reported to the Sumner County Sheriff's Office that she was seen at The Iron Skillet Restaurant getting into a champagne-colored vehicle with tinted windows that was driven by an unknown man.

"Detectives located the owner of said vehicle and learned that Brandee Jan Thomerson had been taken to the Dickerson Road area in Nashville, Davidson County, Tennessee, where she was dropped off at an area motel," according to the Sumner County Sheriff's Office website.

William went home on Valentine's Day 2003 to pick up his wife to find the house dark and door locked. He didn't immediately report her missing because of her history of drug and alcohol abuse.

No one reported Brandee missing until the beginning of March 2003, and the SCSO launched an investigation.

She has not been in contact with her family and friends since the time of her disappearance.

In the 15 years since her disappearance, her case has gone cold.

"When you don't have answers, it's as disheartening for me as it is for the family members," Detective Eddie Cripps with Sumner County Sheriff's Office told WKRN.

After SCSO tracked down the mysterious driver, they searched motels on Dickerson Pike and turned up nothing.

They also investigated William and had him take a polygraph test. No charges or allegations were made that he played a role in his wife's disappearance.

"It's frustrating because we want to find out what happened," Cripps said to WKRN.

Cripps and William asked for anything to help close this case.