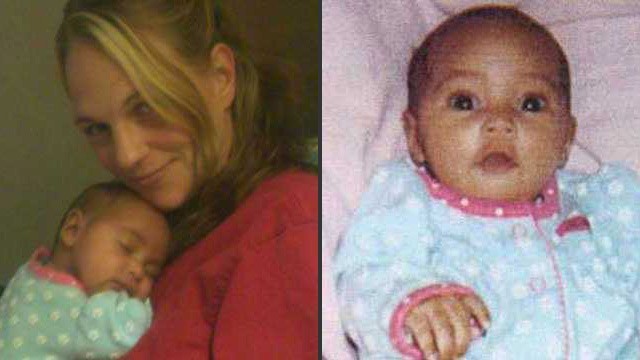 Those who knew Shauna Fryar agree she lived a troubled life with a long history of abusing drugs and with abusive men.

They also agree she would never kill her child.

That's why everyone is at a loss as to how Shauna ended up killed in Millersville and dumped into the Cumberland River while her infant Zaylee hasn't been seen since 2011.

Anyone will information about Shauna Fryar's unsolved murder or Zaylee's disappearance is asked to call the Millersville Police Department Criminal Investigation Division at 615-859-2758, the TBI at 1-800-TBI-FIND or the Center for Missing and Exploited Children at 1-800-THE-LOST.

When Shauna, 28, and Zaylee, 4 months, (pictured above) disappeared May 1, 2011, the mother and daughter were homeless, bouncing between family couches, motel rooms and rent-by-the-week trailers.

At 28 years old, Shauna had seven other children, but they were under DCS care and placed with other family members. Shauna had a rap sheet a mile long with charges like reckless endangerment with a deadly weapon, child abuse, aggravated assault and violation of probation.

But her estranged husband Michael Fryar, whom she separated from in 2005, said the birth of Zaylee had inspired Shauna to try to straighten up and fly right.

"She hung around with the wrong people," Fryar said. "She was a good person. She really was. Zaylee was everything to her."

She was even heard saying "you're the reason I'm living, baby girl" to Zaylee.

Zaylee, who was born in January 2011, is described as a biracial African American-Caucasian female with black hair and brown eyes. She has a brown quarter-sized birthmark on her right leg. An age-progressed image can be found to the right.

Michael Fryar left Shauna and Zaylee alone around 9 p.m. May 1, 2011, in his trailer on C Smith Street in Millersville.

When he returned from the store a short time later, he said the mother and daughter were gone but Shauna's car, wallet, cellphone and Zaylee's diaper bag were left behind.

Despite their disappearance, it took Michael Fryar four days to report the pair missing because Shauna had disappeared four other times during their 12-year relationship. She had always come back.

A few days later on May 7, 2011, Shauna's body was fished from the Cumberland River near the Jefferson Street Bridge in Nashville. There were no signs of trauma on her body.

Zaylee has never been found.

The evidence collected by the Tennessee Bureau of Investigation suggests Shauna was killed in Millersville, taken to Nashville and dumped in the Cumberland River.

According to the TBI, Millersville Police gave the TBI "a leadership role" in the case and deferred much of the evidence collection, interviews and actually investigation in 2011.

It wasn't until January 2015 that Millersville police asked the TBI for all the files on the case.

When Millersville Police Chief David Hindman took office in November 2014, he found missing files from Shauna's case and requested them from the TBI.

At that time, the Millersville Police reclassified Shauna's death as a homicide and reopened the case.

"Why this was not handled four years ago, I don't know," Hindman said in a 2015 interview.

TBI spokesman Josh Devine said at the time that all the evidence was made available to local investigators when it was first analyzed in 2011.

DNA evidence in the TBI's forensic report suggested that Shauna's body was dumped in the Cumberland after her death in Millersville. This caused MPD to reexamine the case.

After reopening the case, investigators then re-interviewed about half a dozen witnesses and persons of interest in an attempt to try to track down Shauna's killer and whereabouts of Zaylee.

"We are working on the basis that she's alive and trying to keep faith that she is alive. Until we have definite evidence or something that brings to light that she is deceased, we're going on the fact that she's missing," Hindman said in 2015.

In August 2018, Millersville Assistant Police Chief Dustin Carr told News 2 the department is still following leads but, so far, nothing has surfaced.

Millersville Police have assigned two new detectives to the case.

After Shauna’s body was identified, an Amber Alert was immediately issued for Zaylee. The alert still remains active.

Michael Fryar, who died in 2018, was considered a person of interest because it took him so long to report the pair missing. He told police he didn't report them earlier because police had told him in the past that she needed to be missing 72 hours before they could file a missing person report. Plus, she had always come back eventually.

Zaylee's biological father, Thurman McMurry was in jail on May 1 for allegedly assaulting Shauna when Zaylee was just a few days old.

Hindman said in 2015 that investigators have two solid suspects but wouldn't name them.