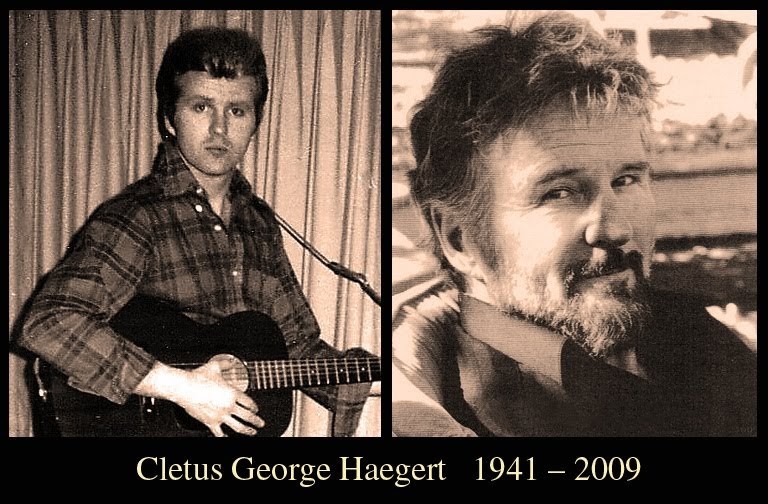 Cletus Haegert was found Dec. 16, 2009, dressed to leave with a pistol next to him and multiple gunshot wounds.

Earlier in this year, Clete's wife of 15 years, Marge Harris-Haegert, had died of leukemia, leaving the status of her multi-million dollar estate in the air.

His family believes he was the victim of an inheritance dispute but could something else be responsible for his unsolved murder.

Most of the information in this article is taken, unless otherwise noted, from a Nashville Scene article from 2010.

Throughout the next several decades, he had limited success writing songs, helping other acts and performing with various bands in the 1980s and '90s. He found the most success as "Dean of Irish Honky Tonk," as the lead singer of Clete O’Hagerty and his Irish Derry Aires.

He signed with Tree Publishing Company as a songwriter. Clete was best known for helping launch the career of Bob Frank in 1972, according to his obituary.

Clete performed with the groups White Crow, Sugartree and the aforementioned Irish troupe.

In the mid-1990s, he met and married his second wife, Marjorie "Marge" Harris-Haegert, whose death started a chain reaction that left him dead in his dream home on Tim's Ford Lake in 2009.

He was described as a kind and gentle man with an easy smile who was generous to a fault.

Clete spoke with his daughter Monday night, Dec. 14, 2009. No one heard from him again.

After several days of unanswered phone calls and emails, his daughter became worried and contacted Barry Harris, Clete's step-son, about checking on her father.

Police found Clete, dressed as if to go out, dead from multiple gunshot wounds, including at least one shot in his back. His .38 caliber pistol lay near his body but it's unclear if this was the murder weapon.

He had been dead a few days.

There appeared to have been a struggle and his home had been rifled through by the perpetrator. A jewelry box emptied of its contents and a door ripped from the hinges of a wardrobe.

A few days before his death, Clete returned Monday, Dec. 14, 2009, to his home on Tim's Ford Lake outside Winchester, Tenn., to find tire tracks in the yard and an outside door ajar. He had spent the weekend in Nashville and Franklin.

At first glance, nothing else seemed amiss but Clete told a neighbor he had a feeling he knew who had broken in and what exactly they were looking for.

Within the week, Clete would be dead.

About a month before the break-in, Clete's wife of 15 years, Marge Harris-Haegert, had died of leukemia.

Her Nov. 20, 2009, death left her considerable estate up for grabs. Her children from a previous marriage felt entitled to most of the $3 million. But she had written a will that left Clete their dream home and a fund for its upkeep.

The rest of her $3 million estate would go to her children. But at least three of the heirs thought a prenuptial agreement the couple had allegedly signed just minutes before their wedding should take president. Unfortunately, it could not be found.

Clete said he couldn't find the document that outlined how much he would get if Marge died first. Three of Marge's five kids wanted to see it.

He had told a friend that his relationship with these three had soured to the point that he feared for his life and started carrying his .38 pistol.

After Marge was diagnosed with cancer, she met with three of her children to talk about her estate. According to the Nashville Scene article, it didn't go well and Marge came back to tell her husband "don't be alone in a room with" one of her daughters.

The will Marge had drawn up a will a few years earlier gave Clete the home on Tim's Ford and a 401(k) with enough money for the upkeep of the house. The rest of her estate was to be divided, unequally, between her children.

She attempted to update the will in her final days but her time ran out.

After Marge's death, Clete was considering filing a request for a larger share of the estate when he was killed. He told friends it was needed because the 401(k) he was set to inherit had lost much of its value in the Great Recession. It didn't contain enough for him to keep their house on the lake.

According to state law, he could request up to 40 percent, or more than $1 million. Clete had allegedly told one of Marge's children of his intentions.

Two days after Clete's remains were found, two of Marge's children Gina Sherrer and Lynne Woods, along with Woods' son Robert Ingram were charged with the aggravated burglary of Clete's home.

But no one has been charged in his death.