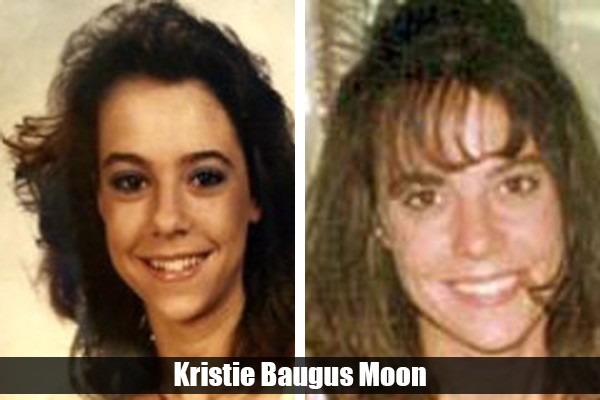 Nearly everyone in Tennessee has heard of Holly Bobo but 12 years before her disappearance another woman went missing in Decatur County.

Unlike Holly Bobo, whose disappearance made the national news and generated a massive reward, Kristie Annette Baugus Moon's disappearance only turns up a couple news stories and forums of Topix and Reddit.

All that's known for certain is Baugus Moon disappeared Oct. 29, 1999, and a month later the last person to see her alive was killed in a shootout with police.

One thing there is an abundance of is rumor and speculation. There are many theories about what happened to Baugus Moon and all of them result in her death.

Even with all the speculation and time that has passed, her family hasn't given up hope.

Kristie Annette Baugus Moon, a 26-year-old mother of two from Parsons, Tenn., disappeared in 1999. At the time of her disappearance, she was described as a 5'4” white woman with brown hair and brown eyes, weighing 115 pounds.

Moon's daughter Kayla Hatley, who was 8 years old in 1999, described her mother as a good person who got caught up with the wrong crowd. She also believes that her mother's drug use influenced how local police treated her case.

"Because she was into the drugs and everything, they did not do as much," she told The Jackson Sun in 2014. "Law enforcement searched for her for two weeks."

Hatley said she just wants some closure and to give her mother the respect and grave she deserves.

With every news report of human remains found, like those of Holly Bobo in 2011, Hatley said she thinks of her mother and what might have happened to her.

"Any time they ever find anything, even if it's not around here, we always hope it is my mom," Hatley told The Jackson Sun in 2014. "It's kind of gotten easier to deal with it. We don't get our hopes up, but we do at the same time."

Baugus Moon was last seen by her boyfriend Michael Pearcy on Oct. 29, 1999. He told police he dropped her at her mother's home, but she never arrived.

There are few other details in the case but it does share strikingly similar details to the disappearance of 20-year-old nursing student Holly Bobo.

Bobo was kidnapped in 2011 from her home in Darden, Tenn., which is about 5 miles from Parsons. In September 2017, Zach Adams was convicted of the kidnapping, rape and murder of Bobo.

Michael Pearcy was the prime suspect in Baugus Moon's disappearance, but he was killed about a month after her disappearance when he got into a roadside shootout with police.

On Nov. 26, 1999, Parsons Police officers Roy Wyatt and his partner Darrell Drehman initiated a traffic stop with Pearcy. According to news reports, Pearcy got out of the car shooting.

Wyatt was shot in the face, leg and chest by Pearcy and Drehman returned fire killing Pearcy.

According to WSMV, Pearcy was wanted by the Tennessee Bureau of Investigation for questioning in the death of “a Decaturville towboat worker and the disappearance of a woman.” It is unknown if the disappearance was that of Baugus Moon.

Interestingly, Pearcy's his father and step-uncle also has connections to the crimes against Holly Bobo.

The charges against both were dropped in the fall of 2014, according to The Jackson Sun.

Adams was convicted earlier this year and sentenced to 50 years in prison for the murder, rape and kidnapping of Bobo.

One theory has Baugus Moon was helping local law enforcement in an investigation into the criminal underworld in Decatur County and murdered her to keep her quiet.

Another claims she was cheating on Michael Pearcy with another man. This theory holds that Pearcy killed her and the other man. The other man was found shot to death in Kentucky.

Yet another theory claims she was killed by a local man who is on the Tennessee Sex Offender Registry for four separate rape and sexual battery convictions.

Others say she was killed for unknown reasons and her remains were burned or fed to hogs at a local farm.

Regardless of what happened, Hatley just wants her mother back.

"She deserves a grave, just not somewhere where somebody stuck her to hide her. She deserves a good plot to lay to rest so me and my kids can go visit her," Hatley said in the 2014 interview with The Jackson Sun.

If you have information about Kristie Baugus Moon's disappearance, call the Decatur County Sheriff's Department at 731-852-3703.