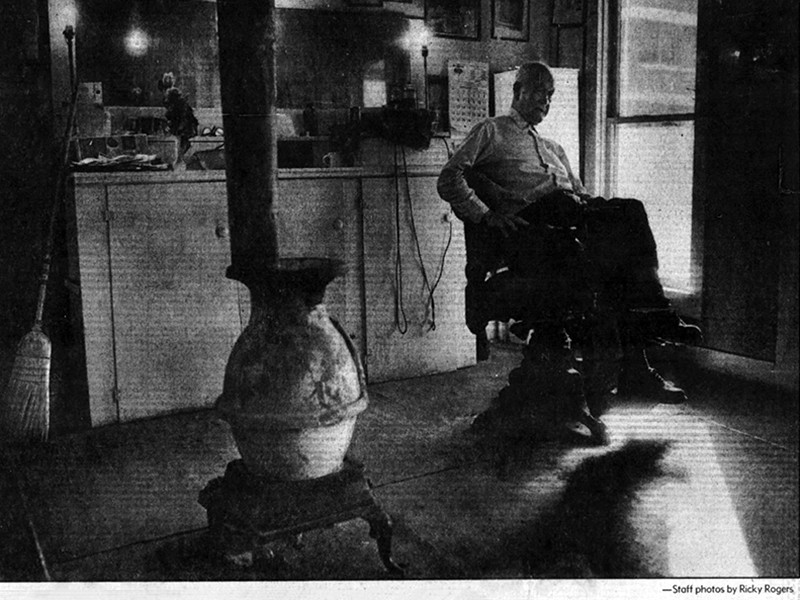 But he didn't find a quicker way to his house. Instead, he discovered the wide open door to Borren's Barbershop and its elderly owner inside beaten and bleeding.

Jim Borren's unsolved murder was called "the most tragic and uncalled-for thing in the world" when he was beaten to death with an iron skillet during a failed robbery attempt in 1984.

More than 30 years later, the murder of Jim Borren (pictured above in a photo from The Tennessean) remains officially unsolved despite investigators believing they had caught and charged the men responsible.

In the year before his murder, Mr. Jim had been the focus of several articles and television programs including a "Tennessee Traveler" column, which was distributed by the Tennessee Department of Tourism, and a profile by Ken Beck in The Tennessean.

Did the media attention bring unwanted visitors to his one-man barbershop?

James Thomas Borren, or Mr. Jim, as they called him in Woodbury, had been a barber for seven decades.

A confirmed bachelor, Mr. Jim was born and raised in Cannon County. He gave his first haircut with a pair of sewing shears at the tender age of 16 to his brother, which led to the neighbors bringing their kids over for a trim.

After a failed grocery store and brief stint as a farmer, Mr. Jim opened the doors in 1943 to his one-chair barbershop heated with a potbellied stove in Woodbury. He lived in a one-room apartment behind his small shop.

"For 40 years, barbering has been Jim Borren's sole business. He has no hobbies, watches no television, rarely eats out and doesn't drive an automobile," Ken Beck wrote about him in a Feb. 12, 1984 article in The Tennessean. Mr. Jim did admit he reads a lot, but mostly from the Good Book.

The 86-year-old charged the same amount, two bits (that's 25 cents) for a haircut and 15¢ for a shave, despite the decades in between his first and last customer. He even gave his youngest customers a nickel refund to buy candy.

"I started at a quarter and never raised the price," Mr. Jim told Ken Beck.

Mr. Jim said he only performed a few cuts, a flat-top, G.I. and what he called "regular." In other words, he liked to cut it short.

Investigators believed the suspects came into the barbershop and assaulted Mr. Jim with an iron skillet, hammer and chair.

A 15-year-old boy, who said he was going home after staying late at school, found Mr. Jim between 9 and 10 p.m. The elderly man was pronounced dead by 11 p.m. from massive head trauma.

The high school student said he was taking a shortcut home when he saw the front door to Mr. Jim's shop was open. Hearing a strange noise from inside, he went to investigate and discovered Mr. Jim. The witness also said he saw a man fleeing out the back.

The teenager asked Mr. Jim if "he was all right." Mr. Jim mumbled an answer and the teenager left to find help. On his way out of the apartment, he said he found a money clip with $89 outside of Mr. Jim's apartment.

The teenager then ran across the Public Square to the Cannon County Sheriff Office, reported the crime and turned over the money clip.

Mr. Jim lived long enough to give police a description of three suspects before succumbing to his injuries. He described them "as a fat man with a slick face and two with hairy faces," former Woodbury Police Chief Roger Elrod testified during the trial of the suspects.

The murder dumbfounded Woodbury's residents. Many were confused as to why anyone would want to assault the man known for giving the cheapest haircuts in the midstate.

"How much money would somebody expect him to have when all he charged for a haircut was 25 cents and 15 cents for a shave? It was just plain meanness is what it was. There was no reason for it," one Woodbury resident said in the days after his death.

Nearly five years after Mr. Jim was killed, Cannon County investigators got a Crimestoppers tip that led to the arrest of a Smithville man.

An anonymous tipster called Cannon County Crimestoppers after they recognized a sketch of a suspect.

The tip led to the arrest of Danny Lee Smithson Jr., of Smithville, who was charged with first-degree murder in September 1989. After Smithson was arrested, he quickly gave up the names of Bobby Davis, of Michigan City, Indiana, and Michael Davis, of LaPorte, Indiana. They were 33 years old and 28, respectively, at the time.

Smithson Jr. was charged as a juvenile because he was 14 years old at the time of the crime.

After the Davis brothers were extradited to Tennessee, they pointed to a fourth man, who happened to be Danny Lee Smithson Sr.

When Smithson Jr. agreed to testify against the Davises, he also implicated his father in the murder and testified to that fact during a preliminary hearing on Jan. 7, 1990.

The younger Smithson testified that he went with his father and the Davis brothers, who were in Woodbury to buy drugs from his father, to the barbershop on the night of Oct. 24, 1984.

Smithson Jr. said his father told him to stay in the Chevrolet Impala as the three older men went inside the barbershop. They were gone about 15 minutes, then returned to the car.

"My father told me if I told anyone, he would kill me. I've lived with this all these years and you don't know what it's done to me," Smithson Jr. testified during the preliminary hearing. "I got tired of living with it."

Afterward Bobby Davis allegedly gave Smithson Jr. a razor, which was later identified as being one stolen from Mr. Jim's shop. He also saw blood on his father's pants later that night, Smithson Jr. testified.

During a pretrial hearing held June 14, 1989, the Davis brothers both denied playing a part in the murder or even having met Smithson Sr. before.

"My people absolutely do not know Danny Smithson Sr.," said John Mitchell, who served as attorney for Bobby and Michael Davis. He added that Danny Smithson Jr. "came up with" the story to save himself.

Mitchell said the brothers were in Woodbury to visit with family, not to buy drugs, at the time of the murder, but they played no role in the crime.

The five-day trial for the older men began Aug. 14, 1989, during which the Davis brothers claimed to have alibis.

Prosecutors contended that Smithson Sr. and the Davis brothers thought Mr. Jim was rich from all the media attention he had gotten over the previous year.

"And when they could not locate the money, they tried to beat it out of him," Assistant District Attorney Tom Jackson said in court.

Yet another witness pointed the finger at Smithson Jr., when he testified that the young man and two other Woodbury teenagers were responsible for the murder. The district attorney said investigators ruled out this theory.

The defense headed by John Mitchell countered that the state presented no direct evidence that the three men were responsible for the crime and called it a case of "mistaken identity."

"This case has got more holes in it than Swiss cheese," Mitchell said.

In addition to claiming they had never met Smithson Sr., the brothers said were elsewhere on the night of the murder.

Michael Davis admitted he was near Mr. Jim's shop that night, which was why his Chevy was seen on the Square. But he was there to make a call from a payphone, not rob and murder Mr. Jim.

In the end, the eight-woman, four-man jury sided with the defendants, finding them not guilty after only five hours of deliberation. Jurors cited a lack of physical evidence, conflicting testimony and shifting blame between the witnesses for providing enough reasonable doubt to acquit the men.

"We hope to God they find the real people who did this," Bobby Davis said after the verdict was read.

District Attorney for the 16th Judicial District Guy Dotson did think he had the real people.

"We believe we prosecuted the right men, the men that killed Jim Borren," Dotson said. "We are disappointed in the outcome."

The juvenile charges against Smithson Jr. were eventually dropped.

Smithson Sr. relocated to Gainsboro, Tennessee. He died in a single-car wreck Nov. 21, 2000, when he lost control of the 1988 Ford Bronco he was driving. The SUV crossed the center line and overturned.

No one else has been charged with the murder of Mr. Jim. A road in downtown Woodbury was named in Jim Borren Lane in his memory.