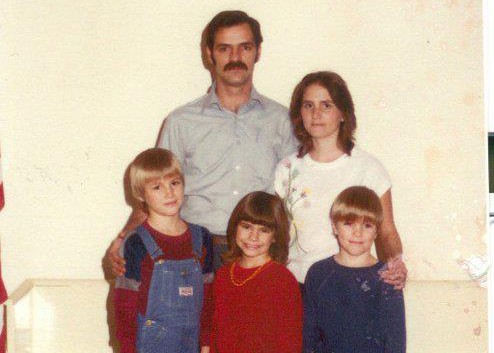 Sheila Bradford's boyfriend JC Bruce and his family had a penchant for crime.

In January 1991, Bruce and his three brothers were suspected of killing Danny Vine, a mussel shell buyer, and his fiancée Della Thornton to steal a truckload of mussel shells. The young couple had been killed and their house where the crime occurred was burned to the ground in Benton County, Tenn.

Investigators spent more than a year on a task force trying to track down the killer or killers when they thought they had found their key witness when Shelia, who had been living with Bruce, told officials from the Tennessee Bureau of Investigation and Benton County Sheriff's Office she knew who committed the double murder.

But the day after they spoke with her she disappeared and more than 25 years later, no trace of her has been found.

Shelia Bradford (pictured above with her ex-husband and children) was a 33-year-old mother of three when she disappeared.

According to the Facebook page "Shelia Bradford Missing," she was the daughter of Shirley and the late Paul Grooms, had two brothers and two sisters, and had been married to Jackie Bradford Sr. for 14 years before they divorced.

Her daughter Kristie Bradford Petz, who maintains the page, wrote her mother now has eight grandchildren, who will never meet her.

Petz also said she has "been searching for answers for years. If you know anything about my (mother's) disappearance please call law enforcement in your area."

On the night of the crime, firefighters were called to the country for a house fire. They assumed the house was empty but a few days later, the skeletonized remains of Vine and Thornton were found in the ashes.

An investigation found Vine and Thornton were shot dead in Vine's home. The home was then doused in gasoline and set on fire.

Investigators told The Sun they thought revenge and robbery were the reason for the deaths of Vine and Thornton. Vine worked as a professional scuba diver, harvesting mussels from the Tennessee River, and a mussel buyer, buying from other divers. A load of mussels, which would have been used to manufacture mother-of-pearl and valued at $2,500, had been stolen from Vine's home after the killings.

With the help of legendary forensic anthropologist Dr. Bill Bass, three of the Bruce brothers and their neighbor were convicted of the murders.

TBI Special Agent Alvin Daniel testified in federal court in February 1993 that he and then Benton County Sheriff Billy Wyatt met with Shelia on Sept. 18, 1992, at a restaurant to talk about what she knew about Bruce's criminal activity. Specifically, the TBI and sheriff wanted to know if Bruce played a role in the double murder of Vine and Thornton.

According to The Jackson Sun, Daniel testified the meeting was cut short after an explosion in one of the outbuildings of the restaurant. Another TBI special agent testified the explosion and resulting fire was likely arson.

Shelia had only told authorities that believed three or four people were involved in the double homicide but named no names.

"She asked them for help, and they said they could not help her … She said to them 'What is he going to have to kill me first?'" recalled Petz, who was 15 at the time of the meeting.

She remembered the explosion as well.

"That is when Momma grabbed me, and we left," she said.

It was three days after the meeting when Shelia Bradford was reported missing.

On the morning of Shelia Bradford's disappearance, she had $700 in cash to take to the bank, but she had to wait for her jeans to dry, a news brief in The Jackson Sun reported.

"Although she had just bought a new car days before, it was still at the home, as were all her clothes, shoes and money," The Jackson Sun reported.

At the time, Bradford was described as a 33-year-old woman, standing 5'3" and weighing 110 pounds with light brown hair.

She hasn't been seen since.

“I don’t feel like the investigation was done appropriately,” Petz said in an interview with WSMV in 2015. “There was no massive search, nothing. She was missing. They said they knew who did it. She didn’t turn up. They were done with it.”

JC Bruce had a long criminal history before he met Shelia Bradford, as did his brothers.

He had previously been convicted of rape and attempted murder and was known around Camden as "a very dangerous man."

He was convicted in 1975 of raping and strangling a 15-year-old girl before throwing her off a bridge into the Duck River. The victim survived, and he spent a few years in jail. Bruce was pardoned early by disgraced Tennessee Gov. Ray Blanton, who sold pardons for cash.

On Nov. 2, 1993, Bruce's brothers Gary, Robert and Jerry along with David Riales were indicted for the murders of Vine and Thornton, as well as robbery and arson.

Before he could face justice, Gary Bruce escaped from the McNairy County Jail in July 1994. He had been a fugitive for a year when he was arrested in Nashville. An article in The Jackson Sun from September 23, 1995, said Gary Bruce has disguised himself and even tried to pass himself off as a woman to try to avoid capture.

When he was on the lam, Gary Bruce's brothers and a friend were convicted in the murders of Vine and Thornton. His mother, Mary Kathleen Bruce, was also convicted of perjury and obstructing justice in the case. The men were sentenced to life without parole.

The case was profiled in Forensic Files episode "Shell Game."

JC Bruce wasn't tried in connection with the double murder. As a result of the probe in 1993, Bruce ended up pleading guilty to federal weapons charges. He was sentenced to 46 months in prison and two years probation.

In 2000, he was convicted of assault and in 2015 he was arrested for poaching paddle fish.

Shelia Bradford's family believes she was killed to keep her from cooperating with law enforcement.