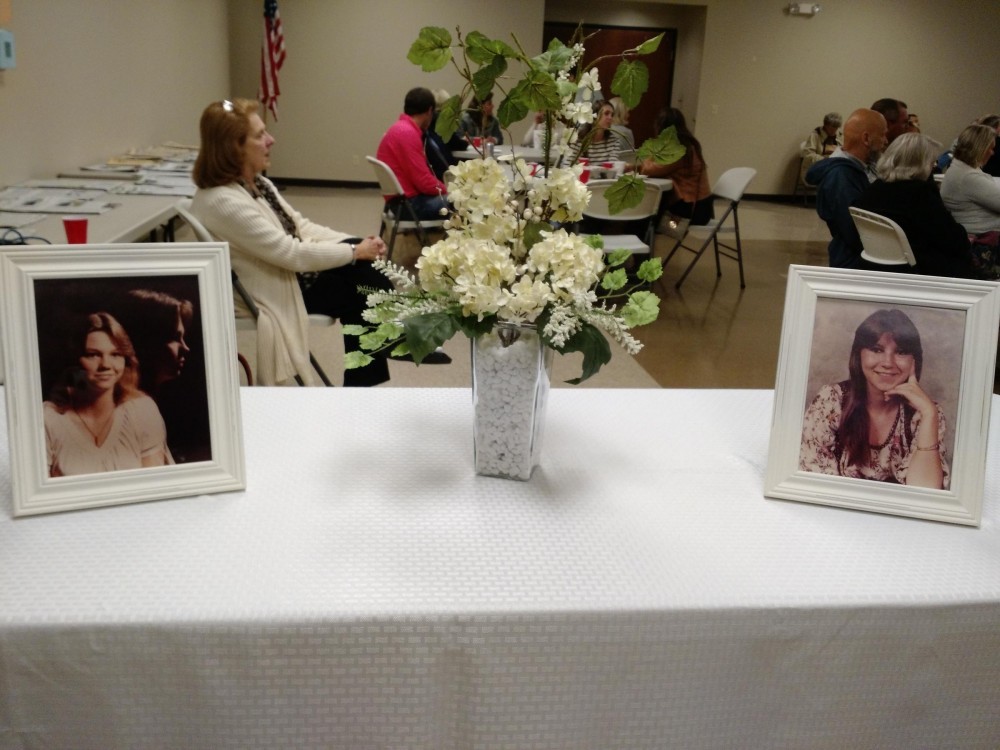 Carla Sue Atkins and Vickie Stout were believed to be runaways until they were found three weeks later in shallow graves in Land Between the Lakes.

The sisters disappeared around 3:30 p.m. Sept. 17, 1980, after riding the bus home from school. After disembarking, they walked to a convenience store on State Route 79, which was less than a mile from their home, to buy gum and crackers.

They were seen by a neighbor getting into a blue pick-up truck near the store as they walked to their trailer home.

They were never seen alive again.

Carla Sue Atkins, 14, and Vickie Stout, 16, were half-sisters, sharing a mother. Vickie's father was murdered in 1965, just a year after her birth.

They lived in a mobile home with their mother, brothers and sisters near Dover, Tenn.

Their cousin Donna Mathis told WSMV in 2011 about the sisters.

"They were fun, they were loving, they got out and just laughed," Mathis said.

The half-sisters were buried in a joint graveside service in a rural cemetery surrounded by their four brothers, two sisters and parents.

"About 100 people attended yesterday's funeral service at Standing Stone Cemetery, a fourth of them young people," according to an article in the Tennessean from Oct. 15, 1980.

Side note: Vickie's father LeLand Stout was 37 years old when he was stabbed to death in 1965 by his roommate in Houston. The roommate told police he stabbed Stout because he "refused to stop singing" and the singing was "keeping him awake," according to the Austin American-Statesman.

After school on Sept. 17, 1980, Carla Sue and Vickie had walked to a combination bait shop, convenience store and restaurant called The Furnace to get some snacks.

When the sisters didn't return home, their mother Margie Atkins reported their disappearance to the police.

Initially, they were listed as missing persons and many thought they would return after a few days. Investigators soon came to doubt the theory when they discovered the sisters took no extra money nor clothing.

Only 18 days later their remains were found in Lost Creek, a wooded area in Land Between the Lakes.

Two hikers were walking Oct. 5, 1980, along an old logging road about eight to 10 miles from the home of Vickie and Carla Sue when they smelled decomposition. Reports vary on what happened next. Some say the hikers discovered the bodies, others say they quickly left and called police from a nearby restaurant. Regardless, officers responded and found their bodies in shallow graves about 75 feet apart.

"Each was buried between two logs and was covered with leaves," according to an article in the Clarksville Leaf-Chronicle from Oct. 7, 1980.

An autopsy by the Medical Examiner's Office in Memphis found both died after being shot with a 12-gauge shotgun. Carla Sue was shot in the back of the head.

The remains were too badly decomposed to tell if they had been sexually assaulted.

Investigators believe they were killed on the day they were abducted.

"We believe they were killed there. It would be kind of gory to tell you why," Sheriff Hicks told The Tennessean on Oct. 7, 1980.

Officers on the scene told reporters that hair, brain and skull fragments were found in a tree near where Carla Sue's body was discovered.

After their remains were found, K-9 officers were used to search the area. They found shotgun shells and more human remains.

Over the years, TBI and Stewart County Sheriff's Office has developed more than 30 suspects.

TBI officially took over the investigation and stored all the physical evidence.

In 2015, the Stewart County District Attorney asked the FBI to join the investigation because some of the evidence was stored in plastic bags and was ruined.

In 1980, former governor Lamar Alexander tried to help the investigation by offering a $2,500 reward from the state. In 2016, Gov. Bill Haslam announced the reward had been increased to $5,000 for clues in the case.

In 2015, TBI released new sketches of the man (above) seen driving the pick-up truck.

During the course of TBI's investigation, witnesses described the man driving the truck to TBI Forensic Scientists, who age-progressed the subject’s picture most recently in 2014.

Former Stewart County Sheriff John Vinson was one of the first officers on the scene when the sisters were found.

He told The Tennessean in 2016 that he believes Vickie and Carla Sue were picked up by someone they knew as they walked home. The suspect enticed them to the secluded spot where they were killed.

Then the suspect accidentally shot one of the girls and the other was just collateral damage.

Trish Gordon, the girl's older sister, told WKMS (Murray State's NPR station) that rumors have been around Stewart County about who was responsible but she doesn't believe the Sheriff's Office has followed every lead.

According to the WKMS story, locals believe SCSO and TBI are too close to the case to solve it. They also have a mistrust of local law enforcement that makes investigating the case difficult.

Top image: Photographs of Carla Sue Atkins and Vickie Stout from a vigil held in 2015. Photo from WKMS.