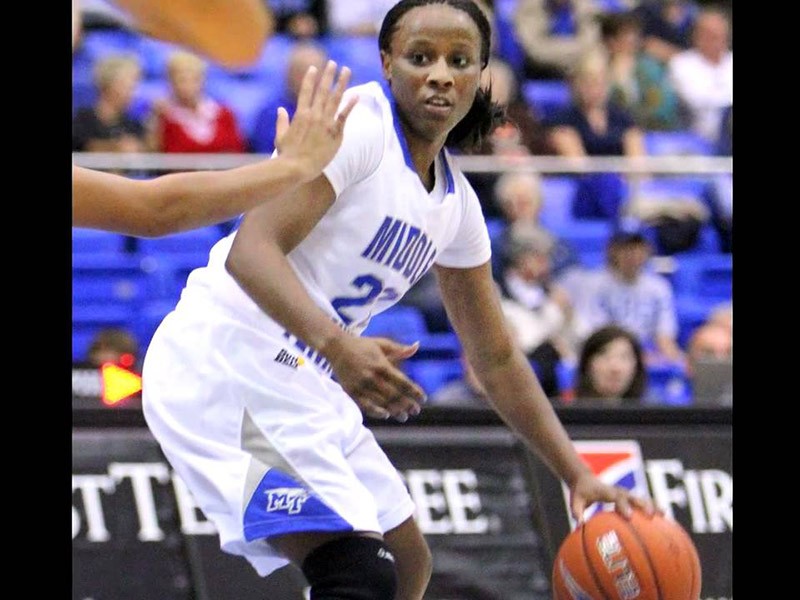 The MTSU women's basketball team was preparing for their year-end conference tournament in 2011 when a dispute between a player and her roommate turned deadly.

Clantina "Tina" Stewart and Shanterrica Madden were from the same town, the same high school, but they couldn't have been more different. One liked sports, the other books. They argued over seemingly everything – music, boyfriends and drug use in their shared apartment. Each complained to property management about the other.

That was until Tina made a final fateful call to the courtesy officer. The incident escalated, leaving the star basketball player dead and her 18-year-old roommate on trial for murder.

Clantina "Tina" Stewart was a student at Middle Tennessee State University and junior guard for the Lady Raiders basketball team.

A graduate of Central High School in Memphis, she excelled in sports. In middle and high school, she played baseball, softball, soccer, volleyball, and ran track. But her love was basketball.

MTSU Lady Raider Coach Rick Insell described Tina as a stand-out basketball player who helped the basketball team "with her personality and her leadership and her smile."

Her leadership continued off the court, where she volunteered to help coach a local high school basketball team. Her impact was felt for years throughout Murfreesboro's community.

She was survived by her mother, Ida Stewart; her father, Adrian Jackson; two sisters, Monika (Maurice) Jones and Miesha Stewart; and one brother, Adrian Stewart, all of Memphis, as well as a host of relatives.

The first in her family to go to college, she was 21 years old when she was killed March 2, 2011, at Raiders Crossing Apartments in Murfreesboro.

Shanterrica Madden was an 18-year-old freshman at MTSU and Tina's roommate when the crime occurred.

An honor student since a young age, Madden's family said she could read a book in a day. She sang in her school choir and loved to dance, her family said. She learned to work on cars with her father. Calling her a "homebody," her mother said Madden kept to herself and valued her family most of all.

She was also the first in her family to attend college. Majoring in political science, she dreant of solving crimes ala CSI and becoming an attorney.

On the afternoon of March 2, 2011, the disputes between the roommates came to a head.

Tina was upset with Madden for smoking marijuana in their apartment while Madden fumed over Tina's boyfriend being over too often.

Madden returned to the apartment in the late afternoon with her friend Renee Reese. The friends smoked marijuana together, thinking they were alone in the apartment.

But Tina was home.

And she didn't want to get kicked off the team and lose her scholarship because of her roommate's drug habit. So she called the apartment complex's courtesy officer, who was an off-duty police officer.

"It was just a simple warning that Tina gave her roommate," men's basketball player and Tina's boyfriend KC Anunu told The Murfreesboro Post in 2011. "Tina told her that if it happened again 'I'm just going to call the courtesy office at the front desk,'" Anunu explained. "It happened again and she called the courtesy office. I guess that's when the roommate got mad."

Tina sent a flurry of tweets about the incident as she waited for the police to arrive. She made it clear the two roommates were not friends and that she thought Madden smoked marijuana deliberately because they did not like each other.

The courtesy officer responded and conducted a consent search of the apartment where he found a marijuana roach in an ashtray. He told Madden to flush it down the toilet and left.

As the officer left, Madden confronted Tina. The pair got into a shoving match that ended when Madden grabbed a steak knife and stabbed Tina in the chest with it.

Reese, who was still in the apartment but didn't see the altercation, saw blood on Madden's arm and asked her about it. Madden responded that she had been cut but was fine and that Tina was unharmed.

Reese then witnessed Madden wrapping a broken knife in a blanket and placing the blanket in a trash bag. Madden threw the trash bag and evidence into a dumpster at the apartment complex.

Reese testified that she left the apartment after watching the events unfold. As she was leaving, Reese saw Tina's iPhone stuck in Madden’s bra. When Madden noticed Reese saw the cell phone, she pushed it deeper inside her bra to conceal it.

Several texts were sent from Tina's phone in the minutes following the stabbing. Someone, apparently in an attempt to cover their tracks, sent a text saying "I about to get in the shower" and, about

Anuna forced his way in to find Tina in her bedroom, clinging to life.

He knew at once Madden was responsible. He yelled at her, chased her from the apartment and called 911.

When police arrived, they found Madden hiding behind a row of cars in the parking lot. She ran when they tried to speak to her. Madden gave up her flight quickly and surrendered before the officer caught her.

After she was arrested, Madden gave several differing statements to the police.

First she said they had argued, but denied stabbing Tina. She said it was a black male, who entered the apartment as she left.

Then Madden said she did stab Tina, but that it was an accident. The knife was on the bed, and she grabbed it to protect herself but Tina fell on it.

Finally, Madden confessed that she and Tina got into an argument over the police being called to the apartment. During the fight, they began to shove each other, then Tina pushed her to the ground and "started beating her head." Madden grabbed the knife off the bed and held it in front of her for protection. Tina moved toward her again, and she stabbed her once in the chest.

According to the coroner, the knife penetrated two inches into the right side of Tina's chest. The deep wound severed her aorta, causing her lungs to fill with blood. She also had a shallow stab wounds on the back of her left shoulder, upper left arm and the left side of the back of her neck.

Madden was indicted by the Rutherford County Grand Jury on July 5, 2011, on one count of first-degree murder and one count of tampering with evidence.

Before the trial began, her attorney, Joe Brandon, filed a motion to remove Judge Don Ash from the case. Brandon argued that Madden could not receive a fair trial because of Ash's connections to MTSU and its athletics programs. In his motion, Brandon cited that Ash was an alumnus of MTSU, a substantial donor to the university, and had spoken at graduation, pictures of which hung in the jury room.

Brandon also pointed out that Ash was Facebook friends with the MTSU women's basketball coach Rick Insell. While there were posts by Ash about the men's basketball program on his social media accounts, Ash didn't post about the women's team, according to court documents.

The motion was denied, but it would surface again on appeal.

Because of the local media coverage of the crime, a jury was brought in from Hamilton County to hear the case.

At trial, Madden testified that she was acting in self-defense.

"She kept hitting my head. It was paining. I was hurting, and she wouldn't listen to me. I was just scared," Madden testified, adding she feared for her life before grabbing the knife from the bed.

"I wanted to defend myself, she wasn't listening to me; she wouldn't let me go," Madden told the jury.

The jury found her guilty of second-degree murder and tampering with evidence. She was sentenced to 29 years in prison. The conviction and sentence were upheld on appeal.

The murder resulted in MTSU developing the "True Blue Pledge," which was written by a task force appointed by university president, Sidney McPhee. It is read at annually convocation and is a commitment to nonviolence.