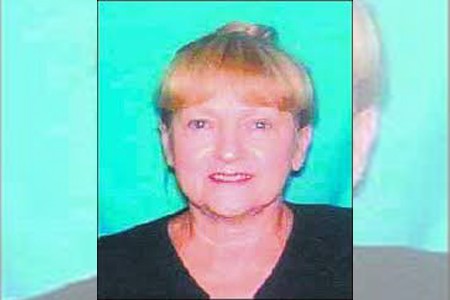 Marsilene Smith disappeared in December 2007 from Murfreesboro and police have searched the state since looking for her remains.

After she was reported missing, suspicion landed squarely on her husband Palmer Smith but all investigators could convict him of was fabricating evidence and lying to investigators.

Marsilene "Marcie" Smith was 69 years old at the time of her disappearance.

Her family described her as a reliable person who would be unlikely to leave without warning.

A blonde haired, blue eyed caucasian woman, she wears eyeglasses and she has a dime-sized birthmark on her forehead.

An insulin-dependent diabetic, Marcie could become disoriented or go into diabetic shock if she is without her insulin for more than a couple of days. The last time she is known to have taken her medication was on the morning of her disappearance.

Marcie was declared dead but her remains have never been found.

On Thursday, Dec. 6, 2007, Marcie went Christmas shopping. When she didn't return home that evening, her husband of 51 years, Palmer Smith, reported her missing.

Her champagne-colored Lincoln Navigator was found the next day at WalMart on Rutherford Boulevard in Murfreesboro.

The vehicle's keys were in the ignition and the passenger door stood open.

Surveillance video from the store showed a man park the SUV around 2:30 p.m., remove a bicycle and ride away. The video didn't give a clear view of the subject.

The bike appeared to be a green, girl's bike. No one in her family recognized it.

In the days following her disappearance, TBI processed the SUV for evidence and MPD launched an aerial search for clues. Her friends and family even held a press conference and circulated flyers in hopes of gaining help from the public.

MPD attempted to track Marcie's cell phone, which had not been used after Thursday afternoon, Dec. 6. It was tracked to Barfield Crescent Road, about nine miles from where her SUV was found and three miles from her home off South Church Street.

On the first anniversary of her disappearance, police were given a map by Palmer Smith's attorneys. While the map's origins were unclear, it held Marcie's possible location on the Mississippi River floodplain near Ripley in of West Tennessee. Palmer Smith said the map had been sent to his house by mail.

Investigators searched the rugged terrain for several days using cadaver dogs and forensic anthropologists but her remains were not located.

Glover Palmer Smith and Marcie had been married for 51 years when she disappeared.

He stopped cooperating with police and hired an attorney shortly after his wife's disappearance.

Another woman even accused him of stalking her only three months after Marcie's disappearance. At his 2010 trial, a local stylist said he used paying her Marcie's funeral and tombstone as a pick-up line when he asked her out on a date. She said he called her repeatedly after he asked her to stop and she has a restraining order taken out against him.

In 2009, Palmer Smith was indicted by a Rutherford County Grand Jury for fabricating evidence and making false statements to police. The charges come from his alleged efforts to “affect the outcome of a police investigation in a false and misleading manner,” according to indictments.

The fabrication charge stemmed from evidence that Smith used "a vehicle with knowledge of its falsity to affect the outcome of an investigation." Police believed Smith was the man who parked Marcie's SUV and rode away on a bicycle.

Smith was also accused of making false statements to Murfreesboro Police Officer Bobby Edwards and Maj. Jim Gage in connection with the map of unknown origin.

At his 2010 trial, witnesses testified and identified Palmer Smith as the man who drove the SUV into the Walmart parking lot.

The Smith children testified to a lifetime of abuse at the hands of their father. They claimed he was physically and emotionally abusive to them and their mother.

"It got to a point that he kind of enjoyed doing it. That's when it went from belts to boards or wire or fist or foot," son Kevin Smith said according to WSMV.

He also testified that Marcie Smith was "scared to death" of her husband and that Palmer Smith once forced his children to watch him kill a litter of puppies with a hammer.

Palmer Smith was convicted of all charges and sentenced to a year in jail and six years of probation. He was also ordered to pay about $3,400 in restitution to local law enforcement to cover the cost of processing the SUV and searching West Tennessee.

Most of his conviction was upheld on appeal.