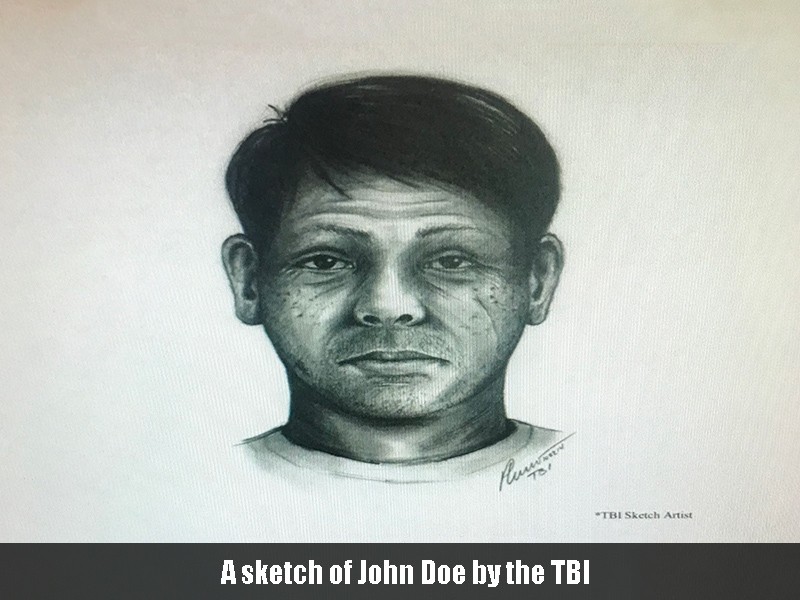 In 1978, a man was found, shot and burned, in La Vergne, Tennessee. Nearly 40 years later, he is still unidentified.

"I look at this guy and think, when he was 5 years old, he didn't think he would end up shot on a boat ramp and wrapped in a garden hose," said Detective Steve Kohler, a cold case detective with the Rutherford County Sheriff's Department.

Kohler is trying every trick in the book to uncover John Doe's identity.

He said today's detectives have more resources at their disposal to identify victims thanks to technological advances.

"Today we would examine everything for DNA, trace evidence, and take accelerant samples," Kohler said. They also have the National Crime Information Center and missing person databases at their disposal.

Back in the 1970s they basically had fingerprints, the media and their wits.

Called John Doe, the victim was a male between 30 and 40 years old, standing 5'10" and weighing 150-165 pounds. He had brown hair and about two-days beard growth. He had dentures, scars from a vascular surgery and a distinctive mole around his waistline but no other identifying marks.

Kohler said the victim's set of partial upper dentures were a dead end because they were counterfeit, meaning there were no identifying marks to track to a manufacturer.

"Apparently Murfreesboro was a hub for bootlegged dentures in the 1970s," Kohler said.

The only clues to his identity were three scars around his groin, likely from a vascular surgery, called a "Dacron graft." The surgery was invented in the 1950s but still wasn't common in the late '70s.

Little else is known.

Around 6 a.m. Aug. 1, 1978, a groundskeeper at Poole Knobs Campground in La Vergne, Tenn. saw what he thought was a pile of burning garbage. On closer inspection, he discovered a partially nude body of a man, wrapped in a burning blanket on the bank of J. Percy Priest Lake.

The victim had been shot four times – twice in the face – and left in this remote part of Rutherford County, according to news reports at the time. The blanket had been doused in gasoline and lit on fire.

"We're of the opinion that he was shot, probably somewhere else, and dumped here," Rutherford County Sheriff Craig Snell said in an interview the day after the discovery.

An article in the Tennessean from Aug. 2, 1978, said the body of Charles Leroy Hill, 51, of Madison was found at the same location two weeks before. Hill had been beaten and stabbed.

Because of changes in investigative techniques, there wasn't much to go on, Kohler said.

The original case file only had five black and white photos of the crime scene, notes from the original investigators, the blanket that had covered the body, and Doe's underwear as evidence.

Kohler explained it was common practice to only take a few photos of the scene back then. While now, investigators can take hundreds of photos of a single scene with digital cameras and copious notes.

Bass had a sketch of the victim completed and he detached the non-burned hand to have fingerprints collected.

In the past several years, a second sketch was done and a facial reconstruction was completed at UT. Kohler has resubmitted the fingerprints to NCIC and the Department of Defense with no luck.

He and other deputies spent hours scouring all the missing person websites he could find to see if a match.

There was no match for the fingerprints.

There was no way to track the dentures.

Previous articles in the past 10 years have opened up leads but they turned into dead ends.

Kohler even thought he had found the family at one point. DNA didn't match the family though.

Despite the setbacks, the detective hasn't given up yet.

Kohler is working with a family history research website to see if a relative can be found. If that doesn't work, the investigation is back to square one.

Anyone with information about this case can call Detective Kohler at 615-904-3046 or Rutherford County CrimeStoppers at 615-893-STOP.