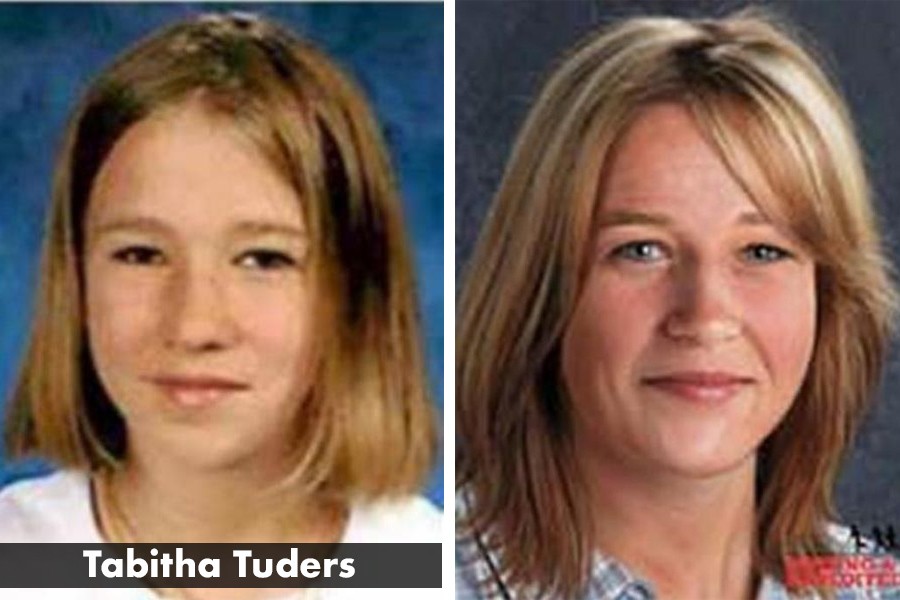 Tabitha Tuders left her home in East Nashville to go to school on the morning of April 29, 2003, and she was never seen again.

According to news reports, she never got on the bus and didn't make it to school.

Over the years, tips have come into Metro Nashville Police Department and the Federal Bureau of Investigation, but none have led to her.

She was 13 years old at the time of her disappearance and described as standing 5'1” tall, weighing 100 pounds. She has sandy blonde hair, blue eyes, a birthmark on her stomach and a scar on a finger.

In interviews with local news, her parents, Bo and Debra Tuders, said she was polite and a little shy, as a straight-A student with a perfect attendance record. She also sang in the choir at Eastland Baptist Church.

By all reports, she liked spending time with her family and liked school.

She wasn't the type to have run away from home, her parents have said.

On the morning of April 28, 2003, Tabitha's mother woke and found her daughter sleeping at the foot of her bed.

“I stepped over Tabitha, I got ready for work and I left,” Debra said during an interview with the Nashville Scene. “I didn’t know that was going to be my last time looking at her.”

Her father then got up and woke Tabitha, so she wouldn't be late for school. The last words they said to each other was “I love you.”

Tabitha got ready for school and left her East Nashville home, headed for the bus stop three blocks away.

Witnesses reported seeing her walking to the bus stop. A neighborhood boy said he saw her get into a red car driven by a black man in a ball cap, but the tip was deemed unreliable by MNPD. Another witness said it was a green car with a cobra on it.

Whatever happened to her happened in a 15-minute window that left no clues, MNPD Detective Steven Jolley told WKRN.

When Tabitha didn't come home from school that day, her parents searched the school and talked to her teacher, learning their daughter never made it to school that day. It was 10 hours after she disappeared when they called the police, and another 45 minutes passed before an officer responded to the call.

MNPD scoured the area and alerted the news but didn't issue an Amber Alert. Instead, some officers, including the MNPD Police Chief at the time, insisted she was a troubled teen who ran away from home, despite all of her possessions, including $20, and clothes were left at her home.

News reports said K-9 tracking followed her route to the alley where the car was reported.

But no trace was found.

Nashville police have been criticized for how the case was handled in the precious hours after her disappearance was discovered. They didn't issue an Amber Alert and insisted she was a runaway, according to an article on the fifth anniversary of Tabitha's disappearance.

In the days that stretched to years since, her family took matters into their own hands – knocking on doors, hanging posters, asking for help, refusing to give up hope.

“We talk about her every single day, to somebody,” Tabitha’s mother said in an interview with WKRN in November.

Her father said in April 2017 the time since her disappearance has been “14 years of hell.”

“One of our potential suspects, there has been a little bit of new information that has come out that I’m kind of working on right now that could be helpful. But it’s in the early stages,” he said in the November interview.

The most recent lead came in 2016 when police issued two federal subpoenas, but no evidence came from them.

In January 2014, police said they found a note in her room with "TDT - N – MTL" written on it. Nothing is certain, but they think “TDT” refers to Tabitha Danielle Tudors.

Police even looked into her parents and other family members, according to Project Jason. Nothing was found to connect anyone in her family to her disappearance.

Some who have looked into Tabitha's disappearance believe it is connected to the abduction and murder of Heaven Ross. The 11-year-old disappeared Aug. 19, 2003, on her way to school in Northport, Alabama.

In 2006, Heaven's remains were found in Holt, Alabama, and her murder remains unsolved.

Sightings have been reported on a regular basis over the years and across the country like in 2015 when MNPD received a tip that Tabitha was living in Fremont, Nebraska. After investigating it, detectives on the case told the Tuders the tip came from someone overseas and was a hoax.

The FBI is offering a reward of up to $50,000 for information leading to the recovery of Tabitha Tuders and the prosecution of anyone responsible for her disappearance. Anyone with information should call 1-800-THE-LOST or the Nashville Metro Police Department at 1-615-862-8600.

Note: Age-progressed photo was done by National Center for Missing and Exploited Children